The Dover Poker Room is one of the newest poker rooms on the New Hampshire poker scene. Despite being less than 2 years old, it has already gone through a substantial renovation that just finished a few days before our visit. Dover is run by the same management group as several other prominent New Hampshire rooms (Filotimo (Manchester), Keene, and Lebanon). Clearly, the hope here was to bring back a well-rounded poker room close to the New Hampshire seacoast. We were eager to see if Dover would be a satisfactory tournament replacement to the now-defunct Hampton Falls and the cash only Brook.

The Dover Poker Room lies about 20 minutes northwest of Portsmouth NH. It is not far from the bustling New Hampshire seacoast. From Portsmouth, head up Spaulding Turnpike (Route 16) to exit 9.  The poker room is about a mile off the highway.  The Central Avenue area where the card room is located is filled with retail and fast food options. Downtown Dover NH is just a couple miles away, and offers a number of restaurants and a decent area to stroll around. 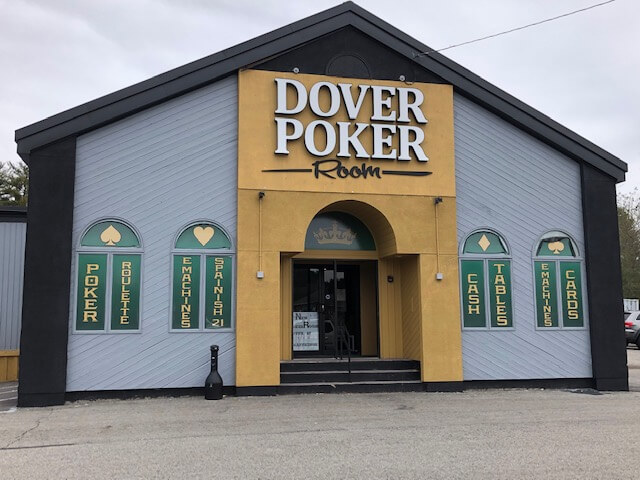 The poker room itself offers five table games at this time (blackjack and roulette). With New Hampshire recently clearing the way for traditional slot machines, a large room of slots is ready to go once legislation is finalized. As of now, there is a row of (NH style) slots games. The complex also features several Draft Kings machines and betting windows. There are a lot of entertainment/gambling options in this relatively small complex.

The kitchen offers a fairly extensive menu, with offerings similar to Filotimo Manchester. The beer list offers a nice range of options. There are about 15 tables outside the poker room where you can sit and have a meal and/or drinks.  The bar area is right at the main casino entrance next to the Draft Kings betting area.

The Dover Poker Room contains 11 poker tables – nine in the main room and two in the  higher-stakes “Jamie’s Room” off to the side. The poker room is separated from the rest of the complex and gets no noise from the dining area or bowling alley. The blue, black and white modern designed carpeting is very thick and brand new. The walls are covered in the same wallpaper as Filotimo Manchester, with scenes of Greek towns and seascapes. The ceilings are high and air quality is good. There is no smoking inside the complex. Although there are no windows to the outside, the room is well-lit, particularly over the tables. 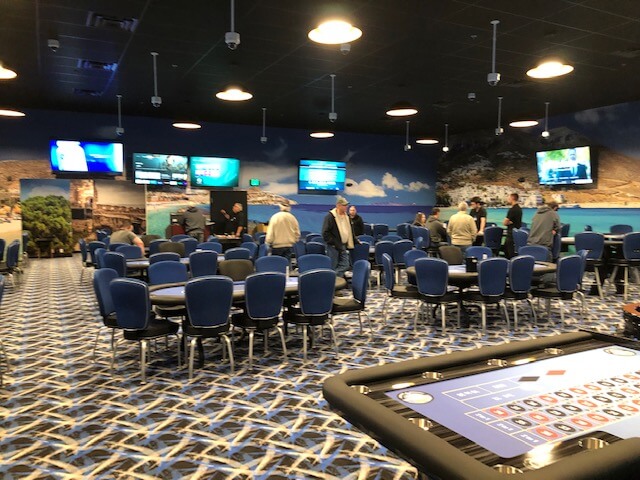 Modeling the Dover design after the recent remodel at Filotimo Manchester was a wise decision. The room is quite attractive and comfortable.

Play at Dover is nine-handed.  The tables are reasonably spaced and feature padded rails and drink cups, but no auto shufflers or USB ports. The felts are brand new and attractive. The chips are brand new and clean. The cards are not branded, and feel a bit thin/flimsy, but the faces are nice and big and easy to read. The chairs are not adjustable and do not have wheels but are padded and fairly comfortable. 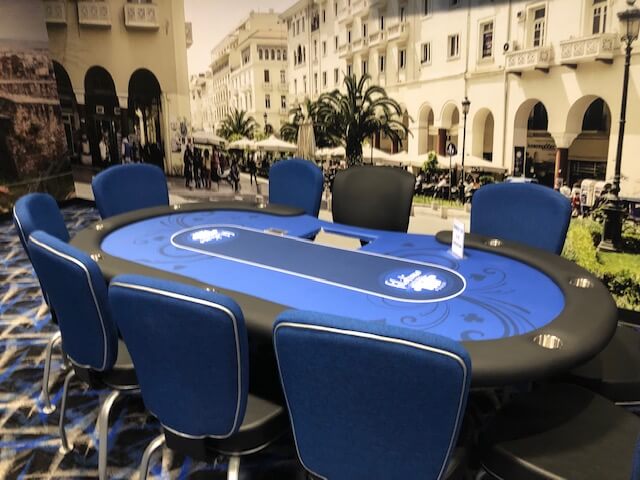 On the day that we visited, the floors at the Dover Poker Room were very active both before and during the tournament. They were both friendly and relaxed, yet on top of what was going on. The dealers were generally solid. As Dover’s expansion is so new, they are clearly still working on staffing up. There were about 20 people on the alternate list for the Saturday morning tournament for a while before they were able to open a 7th table to alleviate congestion. There were about three waitresses circulating frequently throughout the tournament. No one complained about long waits for drinks.

Players at the Dover Poker Room

The players at the Dover Poker Room’s inaugural Sunday tournament included a hall of fame of the New Hampshire poker scene. They were a combination of the crowd that has played the old seacoast rooms for years, along with current Manchester players. In other words, there were not a lot of soft touches at most tables. Play was solid and generally aggressive.  The mood was festive and there was a fair amount of good-natured banter.

The redesigned Dover Poker Room does not disappoint. While not the largest room in New Hampshire, it is one of the nicest. Also, the Sunday tournament offers one of the best structures we’ve seen anywhere at a $100 price point.Click To Tweet

The Dover Poker Room is currently holding two tournaments a week: Friday evening and Sunday afternoon. The 5:30pm Friday tournament has $140 buy-in plus $10 dealer add-on for a 25K starting stack with 20-minute blinds.

The 1:00pm Sunday tournament (we played in the inaugural one) requires a $90 buy-in with a possible $10 dealer add-on, and a 5k bonus for signing up before the tournament starts for a total 35K starting stack. There are 30-minute blinds overall, with a 40-minute level at 500-1,00o, right before the first break. Blind level increases are fairly gradual through the 1k/2K level, and the BB ante does not kick in until the 600-1,200 level. There is no re-entry. There were 76 entrants in the inaugural tournament.

With the relatively cheap $100 buy-in, the size of the starting stack, the 30/40 minute levels, the gradual structure, and the big blinds not kicking in until level 6, this is probably the best value tournament in New England right now.

A couple of aspects of the Sunday tournament could use some tweaking. The first break does not happen until 2 hours and 40 minutes into the tournament and the second break is not for another 2 hours and 20 minutes.  Breaks every two hours would be a welcome relief to older bladders, jonesing smokers, and those who like to breathe fresh air more regularly. Also, because the chip up doesn’t happen until the second break, having the $100 denomination chips on the table becomes a bit of a pain when you are playing 3K/6k. One guy paid off part of a 40K all-in by slowly counting out his 100 and 500 chips rather than using larger denominations.

The redesigned Dover Poker Room does not disappoint. While not the largest room in New Hampshire, it’s one of the nicest.The Dover Poker Room’s Sunday tournament is clearly going to be a big draw, offering one of the best structures we’ve seen anywhere at a $100 price point.